Non-nursing staff are being honored with the PETAL Award for exceptional employees.  A compliment to the DAISY Award for Extraordinary Nurses, the PETAL Awards were created by Greene County General Hospital in 2015 to recognize the hard work of employees in non-nursing roles, from housekeeping and dietary services to clinical areas.  Award winners receive framed certificates, gift cards, and pizza for their entire department. 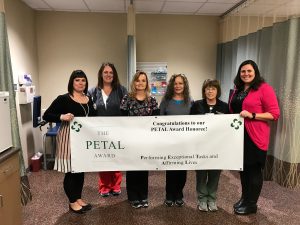 This round of awards was unique, honoring all six phlebotomists in the hospital’s laboratory including Sue Ann Preble (not pictured), Ellen Sanders, Lori Fulford, Debbie Moss, Catrina Montgomery (not pictured), and Angela Yuodzukinas. Phlebotomists are trained to draw blood primarily by performing venipunctures for the collection of small amounts of blood for testing in the laboratory. They were nominated by another GCGH staff member who remarked that each of the award winners has been seen going above and beyond their job duties and performing numerous tasks that are critical to the functioning of the lab.

PETAL stands for Performing Exceptional Tasks and Affirming Lives, and is designed to recognized employees who serve as models to the community for professional achievement. Awards are given for performance, dedication, and diligence in carrying our job duties and advancing the goals and mission of the hospital.

PETALs are awarded three times every year, in conjunction with the DAISY Award. Nominations are accepted on a continual basis, and forms can be found at award stations throughout the hospital as well as online.

GCGH welcomed the first newborn of 2022 on Thursday, January 6, 2022. The parents, David and Cassidy Christy of Worthington, Indiana, welcomed their son, Ezra Christy, at 12:08 p.m. on Thursday. Cassidy and her family report that they are doing good after the delivery. Cassidy also reported that she had a great labor and delivery […]