Linton, IN – September 23, 2016 – In partnership with Union Hospital’s Richard G. Lugar Center for Rural Health, Greene County General Hospital presented an Automated External Defibrillator, or AED, to the Linton First Christian Church during an informal ceremony on September 23rd in the hospital’s conference room. This is the final award in the multi-year grant program that has allowed Greene County community organizations to receive total of 24 AEDs.

An AED is a small portable device that provides an electrical shock to an individual’s heart to correct a detected abnormal rhythm. 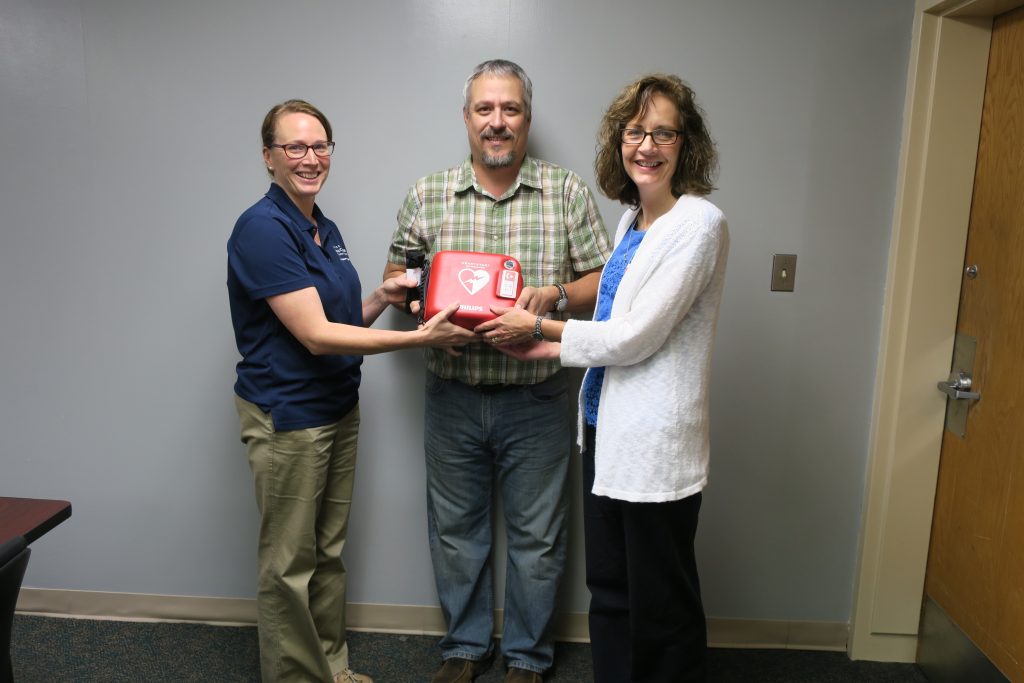 This project was made possible thanks to a federal grant from the Health Resources and Services Administration. Union Hospital’s Lugar Center for Rural Health was awarded the Rural Access to Emergency Devices (RAED) Grant in September 2013, one of 10 recipients nationally to receive this award. Greene County General Hospital has been an active participant in the grant process, assisting many community groups with successful applications.

The purpose of the project is to advance a community partnership in west-central Indiana and east-central Illinois in the purchase and strategic deployment of AEDs in rural areas of need and to train first responders and lay persons in their use, as well as in cardiopulmonary resuscitation (CPR).

By the conclusion of this project, a total of 132 AEDs will have been placed in rural areas of need throughout Fountain, Greene, Parke, Sullivan, and Vermillion counties in Indiana, and Clark and Edgar counties in Illinois. These counties were selected based on their mortality rates for cardiovascular disease being significantly higher than their respective state and national averages.

The figure below illustrates the distribution of the devices within the counties.

The grant has also enabled the training of over 3,300 community members in Cardiopulmonary Resuscitation. The impact of starting CPR prior to the arrival of Emergency Medical Services can double or triple a victim’s chance of survival.

This project is supported by grant number H3DRH26506 from the Federal Office of Rural Health Policy, Health Resources and Services Administration, DHHS.