May 9, 2017 – Linton, IN – Greene County General Hospital welcomed Bonnie and Mark Barnes, Co-Founders of the DAISY Foundation for a unique award presentation today. The DAISY Foundation is a national award program that recognizes nurses for outstanding patient care. The Barnes started the Foundation when their son, Patrick, passed away after weeks in a hospital in the early 1990’s.

“The only positive thing that came of Patrick’s ordeal was his nurses,” said Bonnie Barnes, who went on to say that they chose to focus on the wonderful care and compassion they experienced. Their desire to honor the nurses who cared for Patrick and the entire nursing community became the DAISY Award for Extraordinary Nurses. 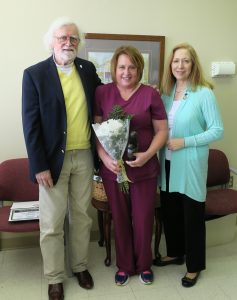 Greene County General Hospital has been a participating member of the DAISY Award since 2015, and presented its fourth award during the Barnes’ visit to ICU Nurse, Susan O’Neall.  Flanked by previous honorees, Eric Corbin (ER) and Brooke Driscoll (OB), O’Neall received her award in a room filled with colleagues and family while the Barnes family told their story and thanked her for her service.

DAISY Award coordinator and Quality Assurance Director Jill Raines read O’Neall’s nomination to the group, an emotional story about a mother and her son. The patient had been hospitalized on her son’s wedding day and would miss the ceremony due to a serious illness that would take her life the very next day. O’Neall served as her nurse in the Intensive Care Unit, and knew how important it was to her patient to see the ceremony. O’Neall quickly secured a tablet for her patient and was able to connect her to the ceremony via Skype. They watched the entire ceremony, even the kiss, from the patient’s hospital bed.

The Barnes family was deeply touched by this story of compassion and excellence in nursing, remarking that the story was a perfect example of the kind of care they experienced first-hand and know to be common among nurses who rarely see their service as extraordinary.

The celebration included special refreshments unique to the DAISY Award. The hospital’s cafeteria provided homemade cinnamon rolls, the only food Patrick Barnes was able to eat during his hospitalization. A connoisseur of the treats, Mark Barnes remarked that they were the best he had ever had.

Greene County General Hospital accepts nominations for the DAISY Award year round. Forms are available on the website at GreeneCountyHospital.com, or at the DAISY Award stations placed throughout the hospital.